I’ve had too much time on my hands during lockdown, I guess. So I started making polystyrene model planes.

I painted this one red and yellow, just because it was similar to the colour scheme of the impressive Cold War dogfighter that I based the model on in one particular picture that I saw of it.

I built this more or less the same way as I built the first plane, including hollowing out the body and slicing it open- although mostly to make it easier to glue the wings on. I did make a tail, by sticking a block slightly wider than the body on the end and then slotting two fins into it. For some reason I hollowed out this block too. I made the wings out of three parts.

Like with the first plane, it is very hard to fly. I think it is also too light. It is harder to throw but does glide better if you can make it get moving. If try to throw it, it just flips over a lot and goes in any random direction. Part of the problem is that there is no convenient way to hold it, because the body fits so well into the wings. I can only hold it on the tail block and the nose. Holding it by the nose is obviously useless, and the tail is just too far back.

It also broke a lot. He nose broke off a few times at about end of the white bit, so I had to add blobs glue around the break after I glued it back on the second time. I made thick lines of glue across the bottom of the wings as well. I completely covered the wingtips. 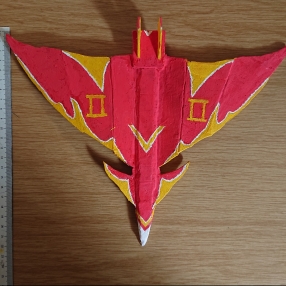 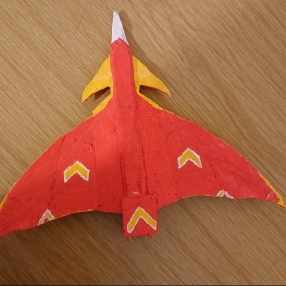